Grant for researcher in the field of applied photovoltaics

Solar cells, which use sunlight to generate clean energy, are critical for the green energy transition. They can be used on buildings (roofs, facades, windows, etc.), prominent warehouse factories, parking lots, and soundproof highways. However, the most well-known commercial solar cells, made of silicon (Si), are heavy and bulky, making them difficult to integrate into building components.

The 1DShine project aims to develop lightweight materials that can absorb light at a comparable level to conventional Si solar cells, with a more than 100 times lower thickness than Si. The material is antimony sulfide (Sb2S3).

In the 1DShine project, researchers at DTU Electro will develop new approaches to grow Sb2S3 with a dominant crystal direction (one-dimensional or 1D) to harvest sunlight using thin layers efficiently. Unlike conventional three-dimensional materials, 1D materials can be produced with intrinsically passive grain boundaries and a low density of defects, so charge carriers generated by light absorption can migrate along the 1D ribbons unhindered. Passive grain boundaries (i.e., without the capture of carriers) in the absorption layer are a decisive factor in bringing the efficiency of a thin-film solar cell up to the level of, for example, monocrystalline silicon, with an efficiency of nearly 27%. It requires the growth of the 1D-Sb2S3 solar absorbers such that grain boundaries can be optimized.

This can be done quickly and accurately using tools for rapid and non-destructive tools for mapping solar cells, which has not been demonstrated at other international laboratories. The green Sb2S3 material consists of nontoxic elements, and there is sufficient antimony and sulfur in the earth's crust, compared to gallium and tellurium used in CIGS and CdTe cells, for large-scale exploitation of this technology.

New insights generated in 1DShine will likely guide the discovery of a new generation of fascinating 1D materials and open new avenues for developing efficient and cost-effective lightweight solar cells.

Read more about the research from PhMS. 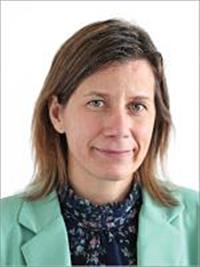